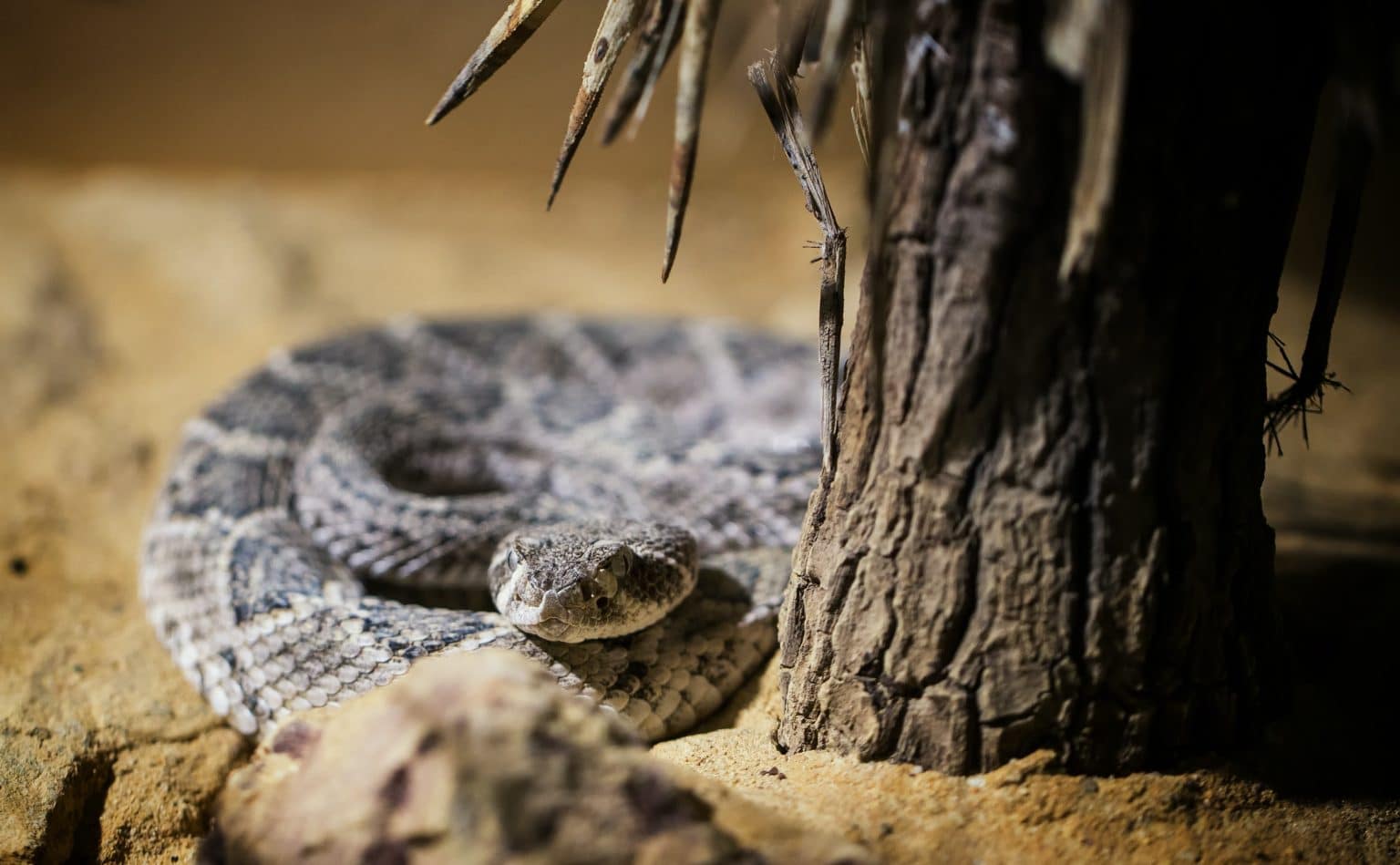 As a home inspector, protecting yourself from snakes may not feel like a priority. Other dangers—such as lawsuits, falling off the roof, or encountering a territorial dog—may seem like more present concerns. However, you’ll be kicking yourself for not preparing better if you come face-to-face with one of our scaly neighbors in a cramped crawlspace or attic.

One inspector, Todd Thuss of Integra Inspection Services in Alabama, found himself in that exact situation. It was under his own home, in fact, that he ran into a snake.

“That crawlspace was too narrow to really be in safely. I was on my belly when I came face to face with a snake that was up on a floor joist. He was within inches of actually licking my face with his tongue.”

Todd backed away slowly. The snake wasn’t venomous, and he didn’t get bit, but the experience taught him how quickly he could find himself in a dangerous position.

“That kind of situation was scary, because, had that been a rattlesnake, I would’ve gotten it right in the face,” Thuss said.

Thankfully, by preparing and learning now, you can avoid feeling helpless if you ever have a close call of your own. In this article, you will learn about venomous snakes, their habits, and which actions to take when you see or suspect a snake is nearby.

When you begin home inspecting, and periodically afterwards, research which snakes and sub-species are active in your inspection area. Try going to a local zoo and seeing the snakes in person. When you get to the point that you know what the different types of snakes are, you will be better prepared for responding to snakes on your inspections. Speed and clarity are important when dealing with snakes, since the symptoms (ex: swelling, nausea, disturbed vision, muscle failure, difficulty breathing, etc.) may escalate to death or an amputated limb if your response is poor.

In the United States, there are many species of snakes, but there are four primary types that are venomous: rattlesnakes, copperheads, cottonmouths, and coral snakes. Since other, non-venomous species are not nearly as large of a safety concern, we will focus our attention on these four types—and there is plenty to know about them! They can be researched in various places, like the National Institute for Occupational Safety and Health (NIOSH), the Forest Service of the U.S. Department of Agriculture (USDA), and various publications—where we pulled much of the information in this article. Learn more about these four venomous snakes below. 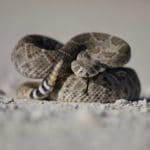 The largest group of venomous snakes in the U.S., rattlesnakes are pit vipers, meaning they have a heat-sensing pit organ between their eyes and nostrils. They have many sub-species, so their scales and coloring can vary significantly. However, their most distinctive feature, the rattle at the end of their tail, makes them easy to identify. You’ll find them in more arid climates—such as mountains, deserts, prairies, and beaches—across the nation. 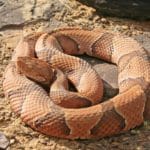 They get their name from the iconic coloring, typically a red or tan color banded with hourglass stripes. Like their rattlesnake cousins, copperheads are pit vipers. You may find copperheads in forests, swamps, rocky areas, and near water sources in the eastern United States, from the East Coast to Nebraska and Texas. 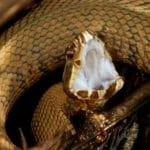 Cottonmouths are pit vipers that get their name from the pale white coloring of their mouths, which they will gape and hold open when feeling threatened. The whiteness of their mouth stands out against the more subdued color of their scales —typically brown, gray, black, or olive. Their nickname “water moccasins” comes from the fact that they stay in and around water sources. You can find Cottonmouths in the southeastern U.S., from Virginia to Texas. 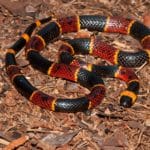 The most distinctively colored snake on the list, coral snakes have red, yellow, and black-banded scales. As the only non-pit viper on the list, they also have a much smaller snout. While their coloring is similar to that of a harmless King Snake’s, you can remember the subtle differences in color patterns by reciting this rhyme: “Red touch yellow, kill a fellow. Red touch black, friend of Jack.” But rather than trying to remember a rhyme, better to avoid it altogether! They can be found in a few separate locations in the U.S., namely Florida and the surrounding coast, Texas, and Arizona.

The Why and Where of Snakes

While they may be unwelcome pests, snakes are not necessarily aggressive enemies. To snakes, humans may occasionally seem like a threat but not prey. With this understanding, home inspectors can better understand how to interact with snakes—and you can help your clients do the same.

Scott Sullivan of For The House in Florida has calmed a lot of his clients’ fears by sharing some simple facts about snakes.

If there are snakes in a home, there may be a rodent problem.

“[Snakes are] going to be anywhere that rodents, a source of food, are going to be. And of course, smaller snakes feed on insects, and there are plenty of cave crickets and other spiders and things that are in crawlspaces. But attics, they tend to be up there for the mice and rats if they can catch one,” said Thuss.

Common Places to Find Snakes Outside 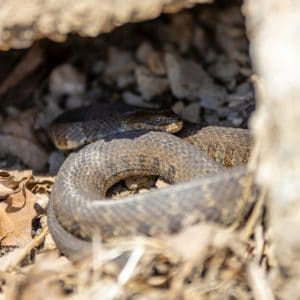 You’re far more likely to find snakes outside of a home that you’re inspecting than inside. For example:

You should always exercise caution when inspecting the outside of a home, especially when your vision is obscured by foliage.

Signs of a Snake’s Presence

There are many times when you will not see a snake first, but rather tell-tale signs that a snake may be nearby. It is important for you to protect yourself by noticing this evidence. It may include:

The rule in all cases: Do not put your foot or hand where you cannot see because snakes can appear anywhere.

“I’ve found them in the main water shutoff at the meter near the street, and even above suspended ceilings,” said Michael Harrison of If Walls Could Talk Home Inspection Inc. in Georgia.

How to Protect Yourself

After studying the snakes in your area and becoming familiar with their habits, you must then create a plan of action. If you do not think about what to do when you are calm, you’re more likely to do something foolish when your fight-or-flight instincts kick in.

If You Suspect a Snake Is Near

Discretion is the better part of valor. Sure, we understand that you don’t want the fear of snakes to paralyze you on an inspection. Conversely, nobody wants you to get literally paralyzed by neurotoxins because you wanted to prove just how much you don’t fear snakes. If you know that there are snakes in the area, see a snakeskin, find evidence of rodents, or know that a property has multiple tempting features for snakes (discussed above), then you should proceed with more caution. Here is some advice: 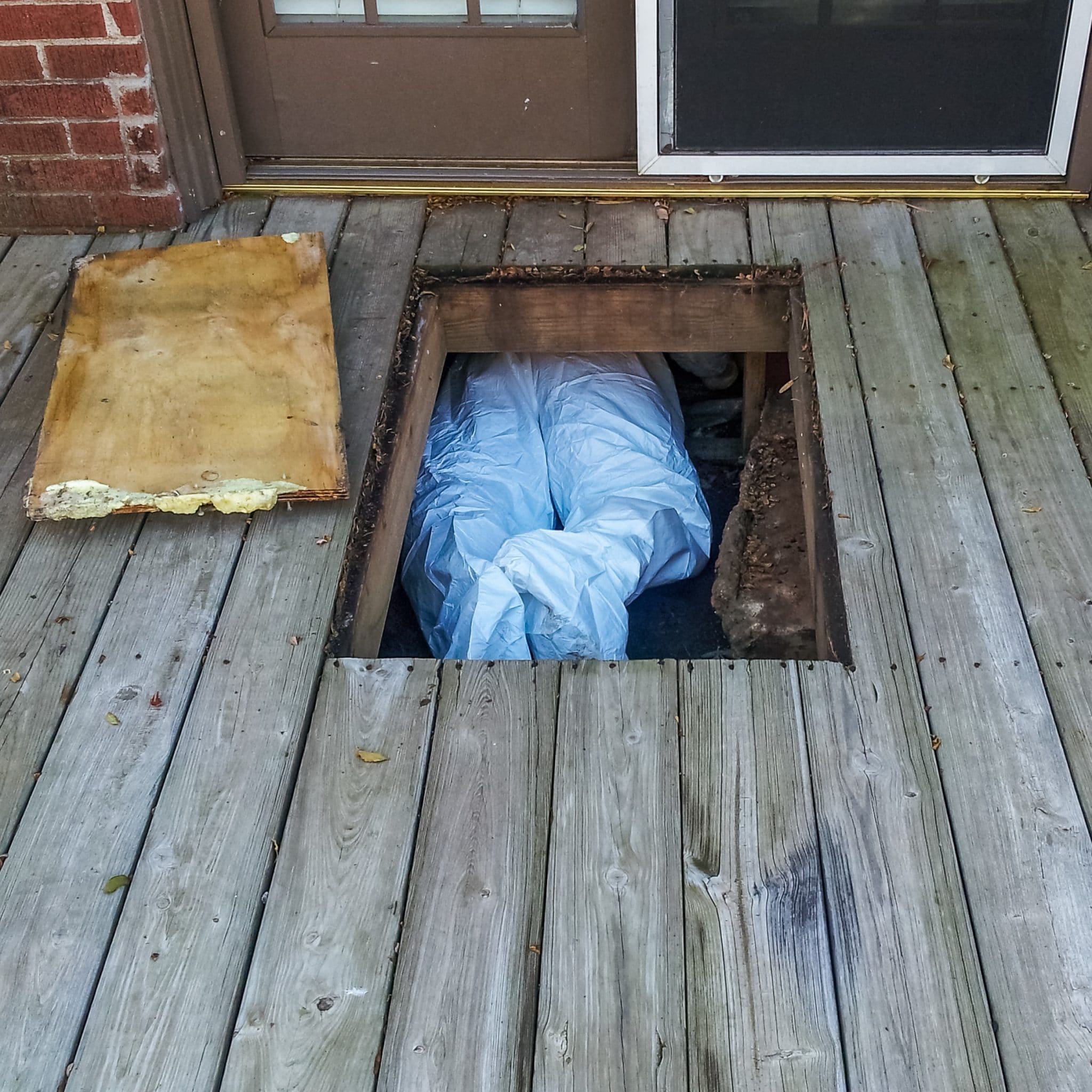 No, you can’t realistically wear armor. But you can certainly wear long pants and boots.

“If you’re going to go hiking through tall grass, it’s probably a good idea to have some boots on, because you may step on a copperhead out here,” Thuss said.

Furthermore, a coverall may not be a substantial protection by itself. But it can be an added layer between you and some fangs when you are in a crawlspace.

Remember to wear thick gloves, especially if you are putting your camera or hands near dark or hidden areas. Better yet, get a stick attachment for your camera, tablet, or phone, allowing you to see and photograph more areas without putting yourself in potential danger.

Another necessary piece of protective equipment is the flashlight, as it can help you see where snakes may be hiding.

“My flashlight’s one of my biggest tools that I use to help with maneuvering under houses. I place it in front of me, lighting up where I’m going so I can see. It also allows other things underneath the house to know that I’m coming,” Sullivan said.

You can learn more about PPE here.

Decide whether or not to proceed.

When you first notice signs of a snake (a snakeskin, or a dirt-floored crawlspace, for example), you need to make a decision. Will you proceed with extra caution, or limit your inspection because of safety concerns? This is a personal choice and will depend on the environment of the house. If you feel that you have proper visibility and maneuverability, then you might still proceed into the crawlspace or attic.

“If I’m in a crawlspace and I see snakeskins, I typically will not venture too far into the crawlspace. I don’t know if the snakes are there or what kind they are, but in a crawlspace, you have very limited mobility,” Harrison said. “I’m just going to say on my report that I viewed it from the entrance or that I didn’t crawl the entire crawlspace because of unsafe conditions.”

If you ever decide that an area is unsafe, make sure to protect yourself legally by writing your decision to not proceed in your report and explaining that you are doing so because of unsafe conditions.

If you see a snake.

Inspectors will often go long periods of time without seeing a snake on an inspection. However, in case it happens to you, plan a response ahead of time so you know what to do. Most, if not all, snake encounters can end peacefully with a proper response.

According to the Centers for Disease Control and Prevention (CDC), you should follow these steps when you encounter a snake:

If you are bitten. 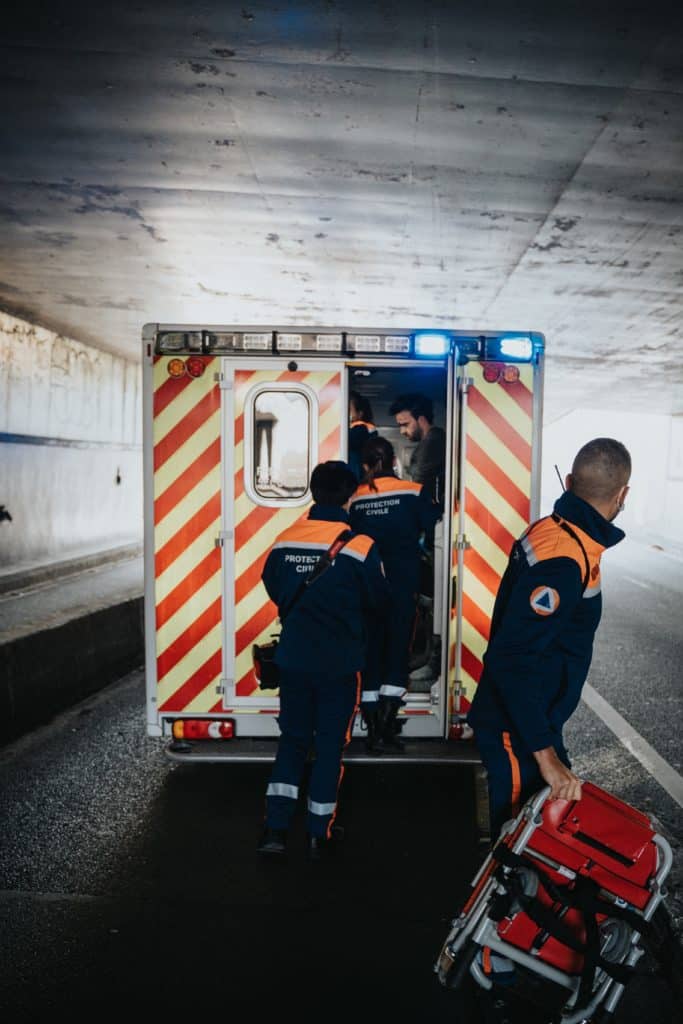 Of the estimated 45,000 snakebites per year in the U.S., about 7,000 – 8,000 are from venomous snakes. Only about 5 of those people die, but long-term injuries are much more common —especially if medical assistance is delayed. If you are bitten while on an inspection, the National Institute for Occupational Safety and Health (NIOSH) recommends these three steps:

If you’re prepared beforehand, you will be able to respond more calmly and quickly. Learn about the snakes in your area and decide how to respond before you encounter them on your inspections.

As a further precaution, consider carrying workers’ compensation coverage.  Workers’ comp insurance provides employees who suffer from work-related injuries or diseases with access to medical and wage benefits. Unlike general liability (GL) insurance, which covers inspection-related bodily injury and property damage claims for non-employees, workers’ compensation looks out for you and the people who work for your company.

Get a quote for workers’ comp for home inspectors today and complete our application. Or, you can learn more about workers’ comp by reading this long-form article on our blog.